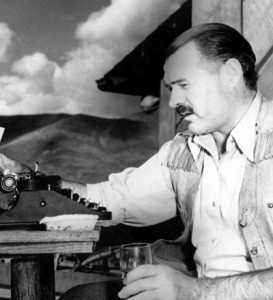 The renowned twentieth century author and journalist, Ernest Miller Hemingway had provided the world of literature a few of the best pieces. Hemingway essays and Hemingway short stories are perfect examples of modern literature. The understated and economic style of Ernest Hemingway essays mesmerized the readers of the twentieth century. Most of Hemingway’s essays and short stories were produced during the mid of 1920’s and mid of 1950’s. Thus this modern writer influenced the world with his stoic, adventurous and macho figure. Not only his writing style but also his personal life became the emblem of the modern society.

The author belonged to a well to do family of Oak Park, Illinois. His father was a physician and they had a descent living standard. After finishing his schooling at The Kansas City Stars, he enrolled himself as an ambulance driver during the First World War. He retired after being seriously injured and this experience of his life found expression in his writing, A Farewell to Arms. His writings generally had two types of characters the post war individual, who needed emotional support and was vocal about his needs and the other was a responsible modern heroic personality. Hemingway led an adventurous life and most of his writings reflected instances from his personal life. Death and violence provided the underlying theme for the best Hemingway short stories.

The author won the Nobel Prize for his contribution towards the literary field in 1954. The list of short stories written by Hemingway is extensive. His energetic style made the essays written by Hemingway, the most recognizable and influential prose till date. His short and compact form of writing made his writing appreciated by many. His work lacked ornamental language and focused on the required material pruning all unnecessary details. He was the best critic of his works and knew the exact method of presenting his ideas. His simple grammar and easily comprehensible language made Hemingway’s essays the favorite of contemporary readers. Hemingway was said to believe in the Ice-berg principle where he only emphasized the main matter to be presented in front of the readers leaving the rest to be comprehended by them. Hemingway considered his readers to be matured intellectuals, who need no extensive elaboration of emotional feelings. Hemingway mastered in dialogue writing. His dialogues were short and made the piece interesting. Many of his dialogues were reflection of inner conflicts of an individual. Hemingway had a modernist approach unlike the Victorian or neo-gothic writers and loved dealing with problems of the contemporary world.

In 1923, he published first collection of short stories and poems. His renowned writing “The sun also rises” was published in 1926. This was a revolutionary piece coming in conflict with the Victorian and neo-gothic writers. His collection of anthologized short stories – “Men without women” was appreciated by the critics and gained much fame for him. His second major work “A farewell to arms” – was inspired by the life of the American soldiers and was the story of an American soldier who falls in love with a British nurse.

His writings are largely autobiographical in nature. His work “Up in Michigan” relates his experiences as an adolescent during his summer vacation. The book is about the sexual awakening of the child and also carries vivid description of Michigan. Hemingway’s semi autobiography character Nick Adams has inspired many film makers and is widely recognized. His stories about Nick Adams end with the concluding chapters of “A Day’s Wait” and “Fathers and sons”. Ernest Hemingway writings drew much inspiration from his life and thus are heart-rending.